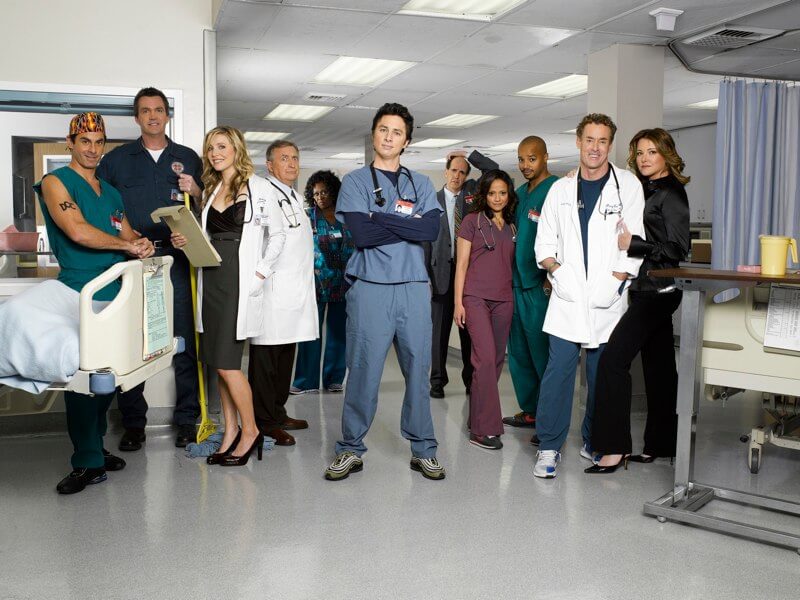 Carey Bennett is a costume designer who has worked on a slew of innovative TV comedies: “Strangers with Candy,” “Scrubs,” “The State,” “Upright Citizens Brigade,” and the American version of “The Office.” Bennett chatted with SyncOnSet about the challenges and rewards of contributing to the funny through costuming.

How did you land the Strangers With Candy (SWC) gig?

I was doing Upright Citizens Brigade (UCB).  I only did the pilot for SWC. Back in those days, it was all in New York. We worked in abandoned buildings that were called production facilities. I was lucky enough to get on UCB and I had been assisting on THE STATE. I’d been in that comedy world since day one. I’ve been so grateful to always do comedies. The woman I’d been assisting stopped designing and I took over where she left off. SWC was in the same decrepit building.

It was a complete delight to set the look of that show. You never know who’s going to champion you, or remember you. The director of that was Adam Bernstein. The actors drove us crazy – they wanted to come shopping with us on the weekends. They drove Adam crazy too. Flash forward many years later, I ran into Adam and he said they drove him crazy too. Adam came out to LA years later to do the pilot of SCRUBS and he called me to do that pilot. I’ve been really, really lucky.

When Amy and I did the pilot for Strangers with Candy, Amy wore a fat pad and it was hers. Her dad used to harass her about her weight. She wore the fat pad home one year for the holidays. She wore it on the plane. Her whole life is her art.

Did you gravitate toward comedy or is that just how your job trajectory went?

I think my work more lends itself to the comedy world because it’s a mashup of realism, the details of real people – like on The Office, the little things that make people weird and super-silly “costume-y” kind of stuff. We did so much crazy stuff on UCB; dolphins, lobsters, giant paper mache heads. Even on Scrubs, we did circus costumes and medieval costumes. I think my strange body of work on The State got me my first job. You couldn’t get better training and you had to reinvent the wheel everyday with 12 actors and with adults playing kids, guys playing girls, girls playing guys.

When designing costumes for comedy shows, what are your typical conversations with the creators?

I get the script, break it down, and do my research. Next, I bring it to the producer, director, and actors to coordinate with them. A lot of times, I bring my best ideas and then we goof around in the fitting room. It’s oftentimes the first chance the actor has to look at the character. It’s kind of like a sculpture. They have their input, I have mine, and we put it together. The costume isn’t silly; it has to be so subtle, you don’t see the joke coming. It has to be realistic or have that quirky thing that makes it hilarious.

What are your biggest challenges when you start on a new show?

I always complain the bulk of my work is done before I get paid because I research, research, research and I go to the places and photograph people. I have to immerse myself in the world as best I can so I can see it. I don’t want to rely on what’s in my head. Real life is so much more amazing than art. Life is art and art is life. I did that on The Office. I’ve never worked in an office myself, soI didn’t trust myself to know what that looked like.  I found a paper company in Glendale, Economy Paper, and invited myself over there to meet the owner. I was completely blown away – all the characters were there. The setting was amazing. I took pictures of everybody. They were so kind. I still use it as a slideshow when I teach. They had inspirational posters printed off their computers – all in a big long line on the length of the wall, taped together. There was a guy there like Dwight wearing a black t-shirt with a wolf on it. I took all those pictures and went to my first meeting. Everyone was looking at tapes of the U.K. version, and I can’t do a show where we’re trying to copy something. I brought my offering and showed it to Greg Daniels, to the accompaniment of [the song] “Welcome to the Working Week” and he said “Oh my god, where is this place? You will take me there.” We all went back there and videotaped it. Even the warehouse was incredible – there was a deer head hanging at the end of an aisle.

“For me, it’s getting access to the right research. I try to get firsthand research from people who are really in these jobs so I can see what makes them tick. The rest of it is up to my darling crew.”

I’ve had so many dream gigs. Now I’d like to do something with kids because I have a kid. One of the most fun jobs I ever had was NBC’s “Undateable.” I feel like I’ll never get to do another job like that again. The show had so much energy and I felt like I was working as fast and hard as I could. My voice was heard because of the nature of it and Bill Lawrence trusted us. They made stuff up at the last minute and we had to roll with it. There was so  much energy working with all those comedians and going live.I would always take stock and see if we did everything because taping rolled by so fast, in just 20 minutes! Bill Lawrence’s incredible strength as a leader is trusting the people around him. He doesn’t micromanage. He thinks of us as collaborators and that got the best work out of me.

Where do you look for inspiration?  Which movies or TV shows inspire you most?

I get it from people on the street. I always say to my husband that I’m going to become a street photographer. I‘m constantly amazed and thrilled by seeing people on the street and wondering, “what made them put that on today?” As a costume designer, you have to get into the thought process of the person. It’s not just going to Macy’s to buy clothes. It’s thinking about why they would buy and combine those things.In a spiritual sense, everybody has some special juice, or mojo that makes them tick.

How does SyncOnSet make your job easier?

My crew is just thrilled to have such organization that reduces chaos. I’ve talked about loving SyncOnSet so much to my crew that they won’t work without it anymore. I think some designers are befuddled about how to incorporate it. I use it for prep when I’m going into meetings: I use it quickly to break down script – there’s 200 costumes in a show, there’s this many changes per character. I can also ascertain if the budget will be sufficient. That’s just golden to me. Having a program to break down the script and give me a quick overview is invaluable.

Which features of SyncOnSet do you find most useful?

The instant script breakdown. I’m always running, so I always need to know who is in which scene and when.

Another feature I use is the actor information sheets with measurements. I share those with other designers all the time. There’s an underground railroad of shared information with designers because sometimes we don’t get casting information until the night before they work. I use those size charts all the time and share them all the time.

I can share the reports, too! For example, if I do a pilot and don’t do the series, I have all that beautiful information that I can pass along to the next designer and they can hit the ground running. It’s incredible.

Lastly, their customer service is incredible! As a costuming community, we’ve been beholden to CPlot-Pro, which is just a spreadsheet to help us do the breakdown. Terrible issues would happen with that program and there was no one to talk to about it. It tickles my heart that I can call SyncOnSet and they will answer me 100% of the time. They’re so sweet, and they have classes! I ran into Jeff Impey at Western Costume and saw it and said “Oh my god, this is the future.” I believed that what they had would better our work. They have literally changed the game and made all of our lives so much easier. My crew is just delighted to have it because we’re all always on the same page and can communicate through it. It just streamlines all the chaos!