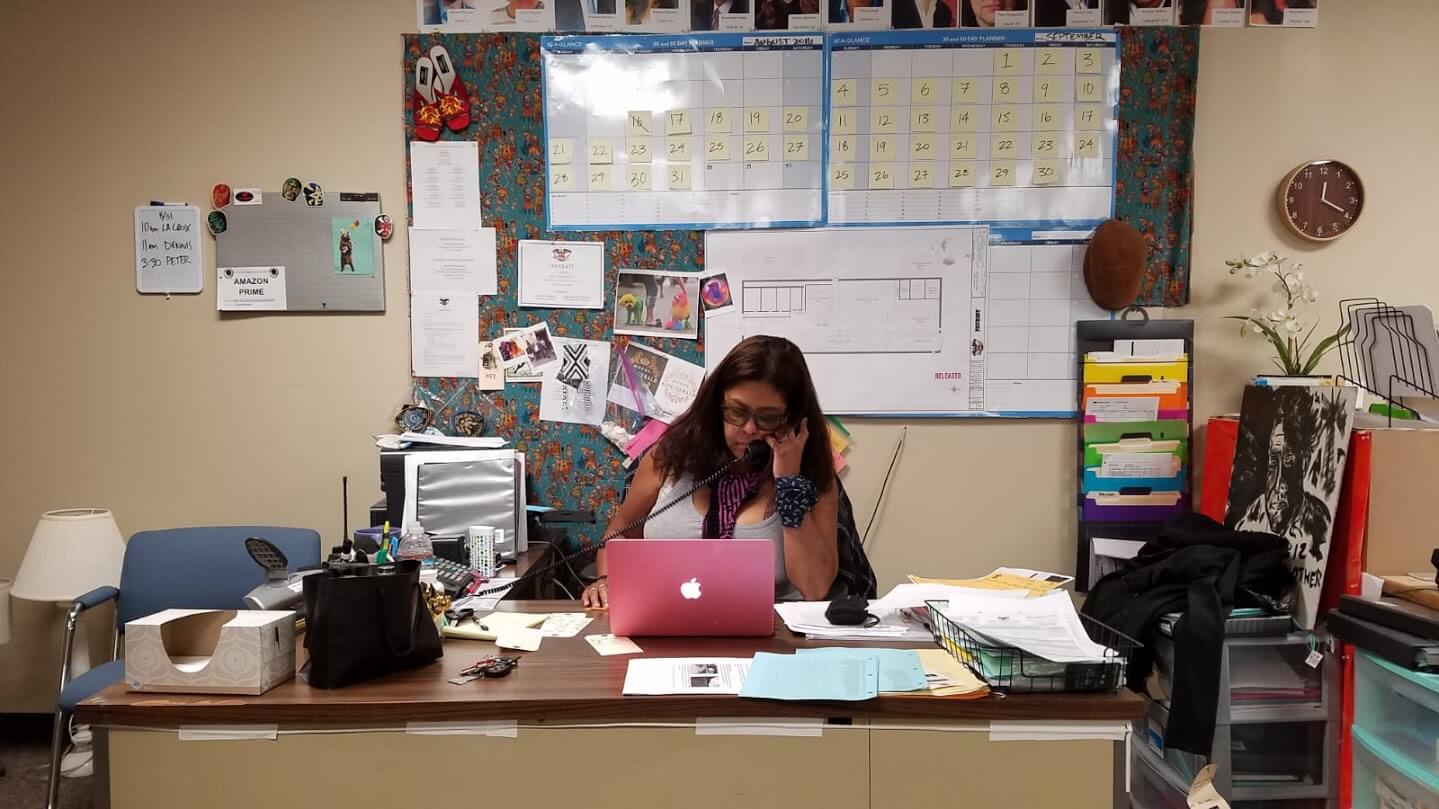 From Morocco to Montreal, Costume Supervisor, Brenda Maben, is expertly managing hundreds of costumes and people as one of Hollywood’s leading supervisors for costume design in film and television. Her credits include, the new Amazon show, Jack Ryan, Gilmore Girls, and Fox’s Empire. Somedays, she’s importing uniforms from Paris, other days she’s setting up fittings for 100+ background actors, and still other days she’s keeping her costume team motivated with her ukulele.

Brenda is a force to be reckoned with and she recently met up with us to share a bit about what goes on in her swiftly changing days on set, in the costume studio, and beyond. If there is one position that requires serious multi-tasking and lightning speed problem solving, costume supervisors deserve a special spotlight.

To experience costume supervising in action, let’s take a closer look into the day-in-the-life of Brenda on the project, Jack Ryan in Montreal, Canada:

We’re in a HUGE warehouse. Jack Ryan’s costume team starts trickling in for a full day ahead. A PA brings in freshly baked pastries from the nearby French bakery as the team gathers with Brenda to discuss and delegate the day’s TO DO’s. Uniforms are ready for pick up and distressing. Different styles of hijabs need to be researched. New script pages have just arrived, ready to be added into SyncOnSet for continuity tracking.

Brenda communicates with members of her team through WhatsApp. Everyone needs to get the information at one time, regardless of where they are: on set, in the truck, shopping, or in the studio. Brenda creates different types of group texts to streamline communication to the appropriate people, such as the costume designer and her assistant about shopping tasks or the key costumer about items that are being dropped off at the truck on set.

As the supervisor, Brenda has to be aware of everyone’s tasks so she can easily manage how to shift priorities when pressing challenges arise. She walks over to the tailoring and distressing areas in the studio to check in on how the uniforms are coming along and keeps everyone aware of timelines.

Today’s challenge: Brenda had rented French uniforms for only a certain amount of time from Paris. After filming a scene that they were used in last week, they were no longer needed and promptly sent back. Just yesterday, Brenda received a call that they needed to reshoot scenes with those uniforms. Unfortunately, the original rented uniforms were already en route back to Paris. What to do? Recreate the uniforms — overnight. Brenda rallies her tailoring team together to make it happen. Today, her team is putting on the final patches. Luckily, the shots are wide, so the intricate details of the original uniforms won’t be noticed, solving for continuity errors! 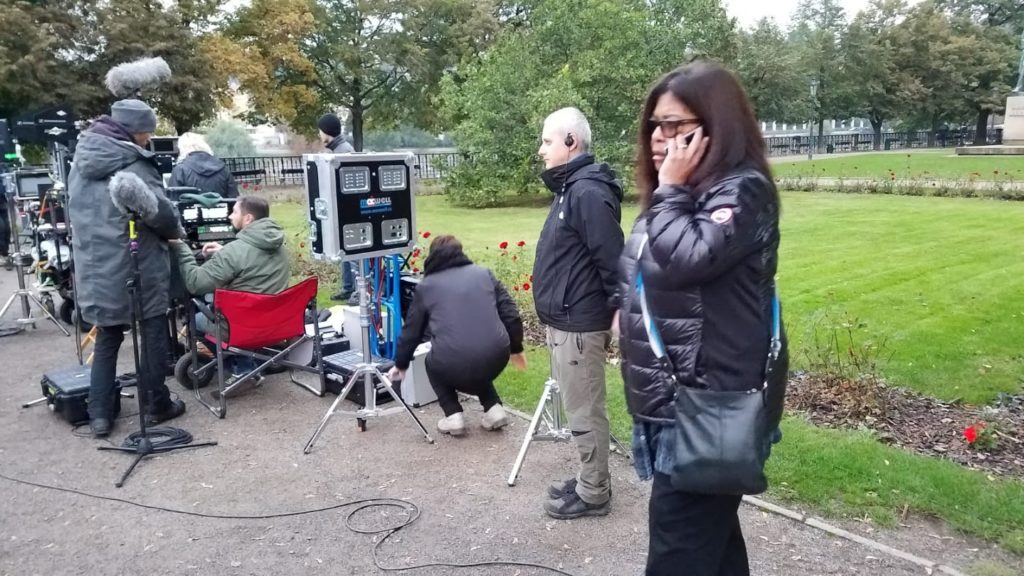 Brenda keeps a TO DO list by her side, writing notes, checking off notes, and revising notes.

Costume Designer, Molly Maginnis, her assistant designer, and PA have just left for the day to shop for warming clothes and swatch for fabric. Brenda is on the phone with customs to import costumes from the US into Canada.

With such a quickly shifting day of fires to put out, people to delegate to, and problems to solve, Brenda keeps her cool by knitting and playing her ukulele. Every Friday, she and her husband write a song together about all the costume shop stories that happened over the past week. It might be about a pair of lost socks or a random inside joke mentioned by an AD in a production meeting. Over lunch, Brenda strums the song on her ukulele while her crew chimes in laughing and singing the chorus.

And then, it’s back to work…

Brenda meets with the Background Costumer and her assistant as they research for a big upcoming scene in Morocco.

Brenda reviews the costume research and begins planning the sourcing, fittings, construction, and continuity tracking challenges of the pieces to discuss with Molly when she comes back from shopping. Because the scene they are working on includes people from all different countries, many of the female civilians are wearing various types of hijabs. Being aware of the subtleties of all the costumes will be an important part of the scene and Brenda needs to ensure that all of this gets communicated to the background costuming team.

Revised script pages have just arrived. Brenda reads them and scans for new wardrobe design updates so she can quickly relay to Molly, the costume designer, what is coming up next.

After reading the script, Brenda uploads the new pages into SyncOnSet. Nowadays there are many more tasks that supervisors have to do, so having costume design software that breaks down the script for costume continuity helps Brenda familiarize herself with the story and ensure she is accounting for every detail that her team needs to bring to life.

Because they block shot Jack Ryan, meaning they shot all outside scenes in Morocco and all interiors in Montreal, Brenda chose to break down Jack Ryan as a feature in SyncOnSet as opposed to an episodic script for TV, both options within the costume designer app. Choosing this breakdown option allowed for scene numbers for easy costume continuity as a result of the story’s flashback moments.

Brenda sets up the fittings for the following Monday. This means that:

The day is nearly wrapped. Brenda still has accounting to oversee. Often, there are certain costumes that need to be expedited for an upcoming scene or additional actors to dress. Brenda keeps up a positive working relationship with the accounting department to ensure that there is enough money for any recent changes. Just today, Brenda thought an upcoming scene only needed 40 extras, but with the new script revisions just in, now they need 140 extras which means Brenda needs to hire on more costumers.

And on that note, the day is wrapped, and the busy life of the costume supervisor continues on!

To sum up, here are Brenda’s tips on what makes a great costume supervisor: